Words cannot express the horror of this morning’s attack during a peaceful Sabbath service. When the gunman reportedly begins his assault with the words “Kill the Jews,” horrific moments of modern human history echo through time, and a dark chapter of our shared human history casts its shadow upon all of us.

The Interfaith Center of New York extends our deepest sympathy to families of those civilians and police murdered and wounded in this vicious hate crime, the community of Squirrel Hill, and other Pittsburgh residents. We stand with people of diverse faith traditions around the country who have condemned this vicious attack and against the current climate of hatred, including: Interfaith Institute of the Islamic Center of Long Island, The New York Board of Rabbis, Anti-Defamation League, The Sikh Coalition, and Muslims Unite for Pittsburgh Synagogue (who are taking donations to support the bereaved families and victims).

In addition, there is a GoFundMe page for the families of the Tree of Life Synagogue and additional statements of solidarity from The Episcopal Diocese of New York, New York State Council Of Churches, Majlis Ashura of New York, The Parliament of Religions, The Jewish Community Relations Council of New York,  Federation of Protestant Welfare Agencies, JCC Manahattan, Tanenbaum, Interfaith Youth Core and others that have come out since we first issued our statement yesterday afternoon. The Mayor’s Office and Rabbi Joe Potasnik at the Board of Rabbis also organized an interfaith event at Temple Emanu-El yesterday afternoon about the attack.

Melanie Robbins, the Deputy Director of the Anti-Defamation League, issued this statement of gratitude.

Ruth Messinger, a global ambassador of American Jewish World Service wrote an article for The Nation titled, “How do we move forward from the Synagogue Shooting?”

ICNY Executive Director, Rev. Dr. Chloe Breyer, also spoke with CBS News about the attack and how to “find hope amid hate.” 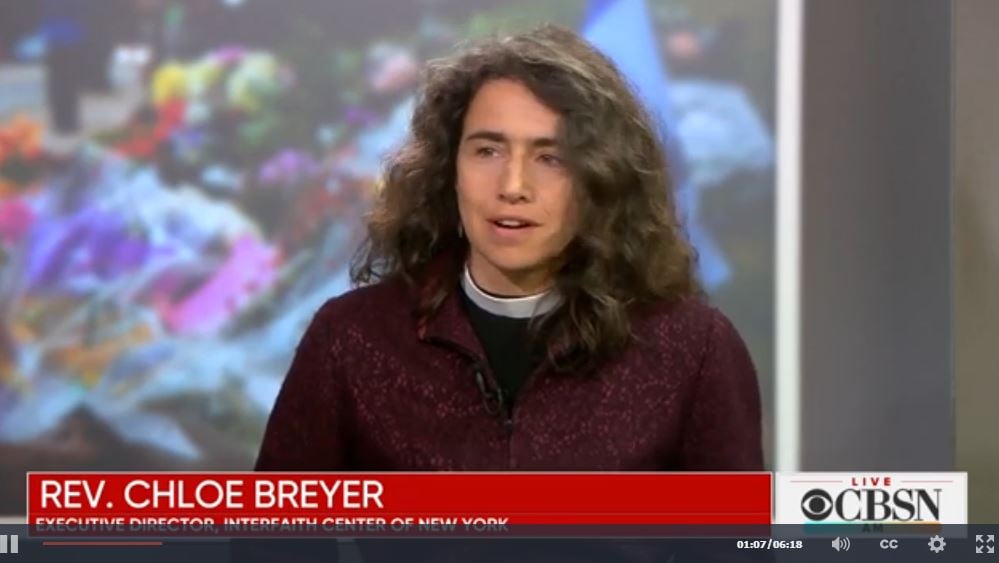